THE FALAK SUFI SCHOLARSHIP NYU GRADUATE SCHOOL OF ARTS & SCIENCE
The Graduate School of Arts and Science of New York University is pleased to announce the Falak Sufi Scholarship awarded by the master's program in Near Eastern Studies at the Kevorkian Center. Candidates for the master's program in Near Eastern Studies are eligible to apply, including applicants to the program's joint degree with Journalism, the concentration with Museum Studies, and the business track.
Falak Sufi was born in Pakistan in 1983. She possessed a generous heart, the urge to engage with and change the world, and a brilliantly original, vivacious mind. She graduated from the National University of Singapore with first class honors in Political Science. While young, she began to publish the work that showed her great gifts and talent. Among her interests were women and gender in South Asia, the historiography of this region, and the strength of the humanities. However, no list can capture the range of subjects about which she thought, spoke, and wrote. She was a much beloved, deeply admired graduate student in Near Eastern Studies at the Kevorkian Center of New York University when she died tragically in New York in 2008.
The Falak Sufi Scholarship is to honor her memory and to support students from countries with a majority Islamic population in South Asia who might not otherwise be able to obtain a graduate education.
These students, preferably female, will be enrolled in the two-year master's program in Near Eastern Studies.
The holders of this scholarship should embody the intellectual spirit and promise of Falak Sufi, and possess a deep and abiding commitment to the role of women in academia and to the questions that she explored, primarily the study of gender in the countries of the Near East, Middle East, and/or South Asia with a majority Islamic population.
For 2020-21, the scholarship includes an academic-year stipend (a minimum of $28,850), tuition, student health insurance, and registration and services fees for up to two years, provided that academic standards of the Graduate School and the graduate program are met.
Application information for all potential students to the master's program in Near Eastern Studies can be found at gsas.nyu.edu/admissions/gsas-application-resource-center
The application deadline for fall 2020 admission is January 4, 2020.

Questions about the Falak Sufi Scholarship should be directed to gsas.admissions@nyu.edu
For more information visit gsas.nyu.edu 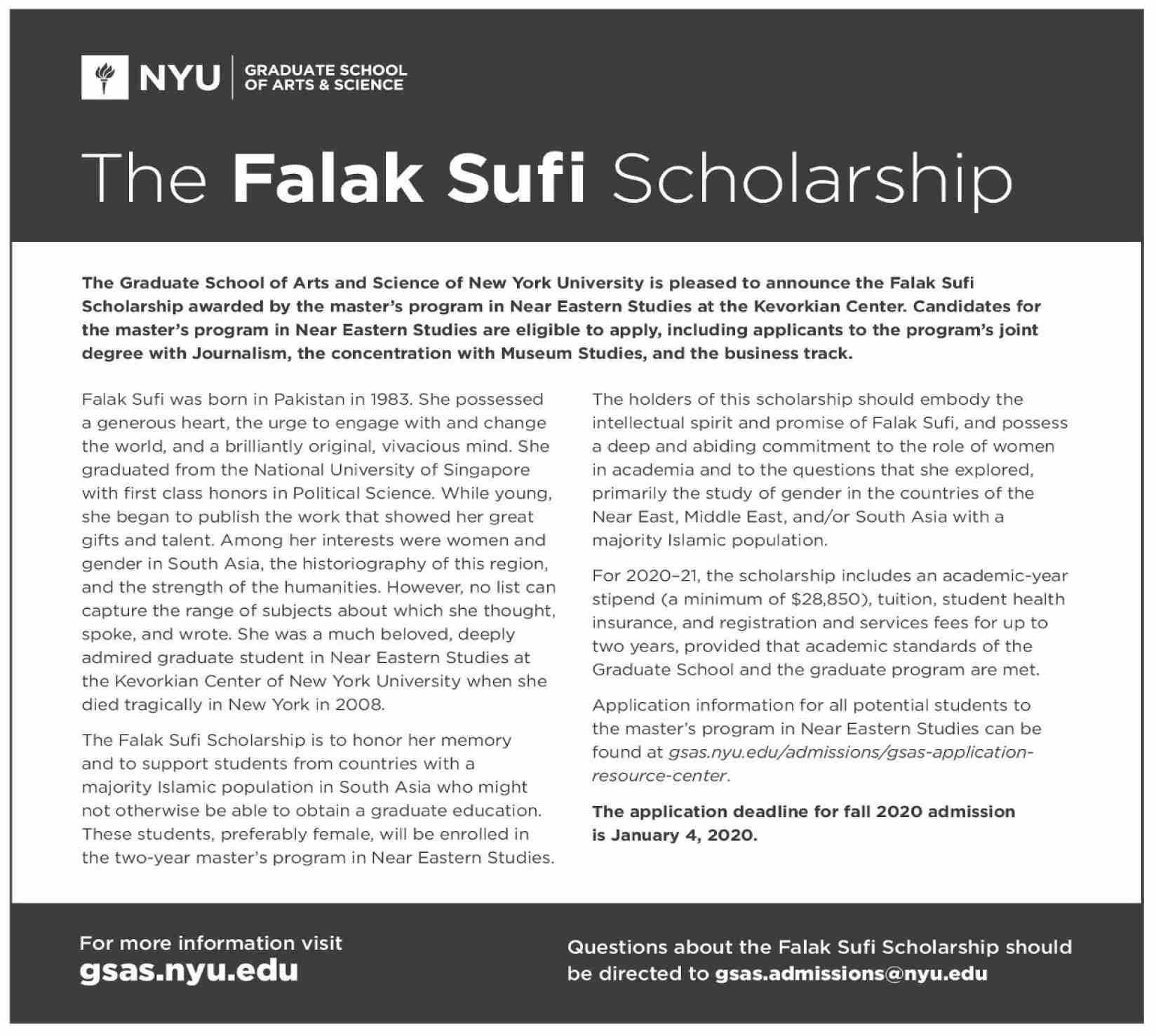 Careermidway.com is an effort of lofty aspirants. We voluntarily bridge seekers with employers and other career building sources.